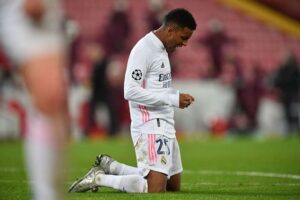 Rodrygo is a right-winger playing his club football for La Liga club Real Madrid and the Brazil national team.

Rodrygo as commonly known was born on January 9, 2001, in Osasco, Sao Paulo, Brazil and, named Rodrygo Silva de Goes. At a young age, he found a youth club known as Ceara Sporting Club. Thereafter he spent between 3006-2010 learning football in this club. He consequently joined the Santos Fc youth in 2011.

Upon joining Santos aged 10 years, he was deployed to the futsal team with which he was with until March 2017 when Dorival Junior called him to the senior team. Finally, he made his first-team debut in a 3-1 win over Atletico Mineiro on November 4, 2017.

For the first time, he scored for the club against Ponte Preta in Santos 2-1 win in the Campeonato Paulista. He signed a five-year contract with Santos on July 21, 2017, but he could not finish it as Real Madrid signed him. He left Santos with 9 goals, 5 assists in 41 appearances in Serie A and 3 goals in 9 Copa do Brasil games.

After Real Madrid got into an agreement with Santos over Rodrygo on September 25, 2018, the Santiago bound continued to stay at Santos for a further one year before traveling to Los Blanco in June 2019. His agents benefitted from his transfer as 20% of his 45 million euros fee paid went to them.

Also, Rodrygo played 5 Champions League games. He scored his first hat trick and assisted in one other against Galatasaray in 6-0 win on October 6, 2019, at home. Besides the hat trick, he as well scored and assisted away at Club Brugge in a 1-3 win on December 11, 2019.

2020-21 season, the Brazilian made 22 La Liga appearances and 11 Champions League games. Certainly, he scored one goal in each of the competitions. In the Champions League, he scored a winner in the 26th minute at home in a game that ended 3-2 on November 3, 2020. Besides, he recorded an assist at home on December 9, 2020, against Borussia M’gladbach.

The Brazilian began playing for his country in the under 17 team when he was called on March 30, 2017, ahead of the Montaigu Tournament. He played four games in this level netting three goals. His first goal was in a 2-1 defeat by Denmark and two others against the United States and Cameroon.

Despite being withdrawn from Brazil under 20 along with his Santos teammate Yuri Alberto after their call up on March 7, 2018, upon request from his club’s president he found his way back to the squad.

He made his under 21-team debut on October 13, 2018, at the age of 17 years, 9 months, and 4 days under Carlos Amadeu. After his debut, Rodrygo made 10 appearances in which he scored three goals before joining the under 23 team. 8 of the games were in the Under 20 South American Championship and 2 other games in the under 20 international friendlies.

On February 4, 2019, he missed in 2-3 defeat by Uruguay due to suspension, he returned registered and assist in their 1-0 win over Bolivia. On January 21, 2019, he scored a brace against Venezuela a game Brazil won 2-1. His only goal in the international friendly was against Chile in the 81st minute on October 13, 2018.

Following the joining of the under 23 team, Andre Jardine on October 11, 2019, gave him a chance when he was 18 years,9 months, and 2 days. The winger impressed and he played a total of five games in which he netted once then he was included in the senior team. His only goal was in the under 23 Amateurs international friendly against South Korea under 23 in the 87th minute.

Tite when selecting his squad that was to represent Brazil in the Superclasico de las Americas, he included Rodrygo, he was 18 years, 10 months, and 6 days. He came on as a substitute for Willian in his debut game on November 15, 2019, in a game they lost away to rivals Argentina 1-0 in an international friendly. Also, he played one World Cup Qualification game against Bolivia in a 5-0 away win at Bolivia on October 10, 2020.

The right-winger’s value has risen over time; an analysis of his current market value reveals that Rodrygo has a market value of 35 million euros. Tracking back to his time at Santos FC, he had a market value of 100,000 only as of December 2017 when he was 16 years old.

His value rose significantly to 10 million in March 2018 at the age of 17 years. At the age of 18 years and amid interest by Real Madrid to sign him, the market value rose further to 40 million euros in February 2019.

After signing for the Los Blancos, Rodrygo had his market value at 50 million euros in December 2019 before a steady drop. In April 2020, his value went down to 45 million and was maintained until January 2021 and by June 2021, it was at 35 million euros.

The right-winger has an estimated net worth of 10 million euros. The main source of his worth is his successful football career where he gets his earnings. With his age, James still has the potential to create money and build on his worth.

Globally Rodrygo ranks at 163 among all players in the world. In his country Brazil, Rodrygo is number 14. Looking at how he sits at the club level and the La Liga, he settles for 11th position at Real Madrid and 36th position in the La Liga respectively. On the right-wing, which is his main position of play, he ranks number 16. A quick look at his age mates that are players born in 2001, Rodrygo stands at position three.

Rodrygo has an overall rating of 79 with the potential of 88. He rates with four stars in skill moves and three stars for the weak foot. He has an international reputation of one. His work rate is medium/medium. In terms of traits, he is a technical dribbler and flair.

His first transfer was when he changed his youth club Ceara Sporting Club to join Santos FC. On July 21, 2017, he was included in the Santos FC senior team during the 2017-18 season. Following his good performance, Real Madrid in the 2019-20 season spent 45 million euros to acquire his services.

Position and Style of Play

Rodrygo’s main position of play is on the right-wing. However, he can play in other positions as well like at the Centre-forward and left-wing. With his acceleration and speed, he poses a threat when it comes to counter-attacking. He has an eye for goal and can score.

He is composed and likes to cut from inside using his skill he creates space to operate on a free attacking role where he can dribble. When with the ball, he is comfortable and finds a way to create goal-scoring opportunities for the team.

He joined the Real Madrid team on July 1, 2019, on a transfer fee of 45 million euros, the club had an agreement with him and he signed a six-year contract that will keep him at the club until June 30, 2025, when it will expire. The right-winger pockets a salary of 75,000 pounds per week and 3.6 million pounds per year at Real Madrid.

Photo credit:goal The Premier League 2022-23 summer transfer window opened on July 1, 2022 for clubs to sell or buy new players in a bid to strengthen their squads. Tottenham stands out as the...